Space-Bop is a baby theatre piece conceived by Tia Shearer-Bassett and produced by Arts on the Horizon in Alexandria in 2016.

Space-Bop draws on little ones’ love of light and vocal play and takes place under a starry sky. An actor (Séamus Miller) finds a star and undertakes an epic journey to bring  it back up into the night sky, accompanied by the vocal stylings of the musician (Christylez Bacon).

Wit’s End Puppets created the star, a rocket ship, miniature astronaut, planets and a comet creature for this magical play. Puppets were built by Amy Kellett and Cecilia Cackley. 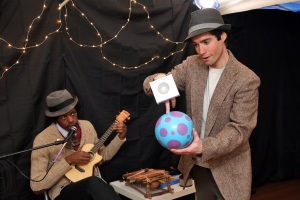 Christylez Bacon and Séamus Miller with the Astronaut. Photo by Aram Vartian.

Christylez Bacon and Séamus Miller with the Comet Creature. Photo by Aram Vartian