As we continue creating characters for The Amazing and Marvelous Cabinets of Kismet, much of the process is about simplifying, stripping down and finding the bare minimum of lines and texture that communicate the essence of a character. Here is a quote from fantasy master Terry Pratchett about how even very simple art contains magic. 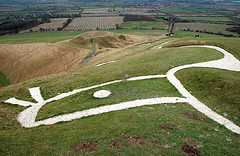 The White Horse of Uffington in England, which Pratchett often describes in a similar way.
CC licensed image via Flickr

“Someone had drawn a tree. It was the simplest drawing of a tree the Bursar had ever seen since he’d been old enough to read books that weren’t mostly pictures, but it was also in some strange way the most accurate. It was simple because something complex had been rolled up small; as if someone had drawn trees, and started with the normal green cloud on a stick, and refined it, and refined it some more, and looked for the little twists in a line that said tree and refined those until there was just one line that said TREE.