We’ve had some casting changes in The Amazing and Marvelous Cabinets of Kismet over these past few weeks, due to some unforeseen circumstances. As a result, we are thrilled to welcome Amie Root and Matt Reckeweg to the project! 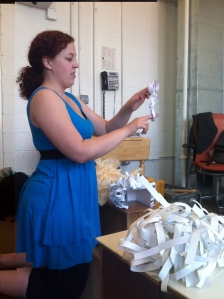 Amie Root is a performer, fight director, choreographer, stage combat and movement instructor based out of Washington, DC. She graduated from the University of Wisconsin-Stevens Point with a BA in Drama, with a focus in physical theatre. She currently works as a teaching artist for the Tony award winning Shakespeare Theater Company, DC. She has taught movement and stage combat courses at University of Kentucky, University of Nebraska-Lincoln, Regent University-Virginia Beach, Kennesaw State University, as well as the three week National Stage Combat Workshop hosted by North Carolina School of the Arts and returned, for a third year, to the three week Central Illinois Stage Combat Workshop hosted by Eureka College. She is also guest artist faculty for California State University’s Summer Arts program hosted by CSU-Monterey Bay.

Matt Reckeweg is a director, puppeteer, visual artist, and a DC area native. He studied Theatre at the University of Maryland, College Park where he was a member of the improvisational theatre group, Erasable Inc. In 2009, he co-founded Pointless Theatre, a DC non-profit organization dedicated to creating original works of puppet spectacle, where he currently serves as Co-Artistic Director. Pointless directing credits include: Canterbury (2013), Minnie the Moocher (2012), Hugo Ball: a Super Spectacular Dada Adventure (2011), and The Sleeping Beauty: a puppet ballet (2010). Pointless design credits include: Imagination Meltdown Adventure (2012), and The Solar System Show(2010). Other credits include performing at the Puppet Co. in Glen Echo, and designing for Flying V Theatre. In addition, Matt also teaches puppetry and improv through various schools and local organizations including Arena Stage.