When Cecilia was traveling in South America last year, she took a workshop with Argentine puppeteer Gabriela Cespedes in the art of caja lambe-lambe puppetry at the Convocatoria de Mujeres Titriteras (Convention of Women Puppeteers). The following is an interview with Cespedes about her work. It has been translated from Spanish and condensed for this blog post. 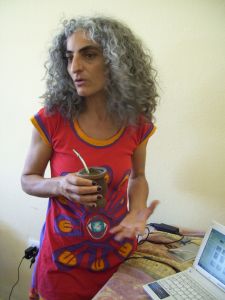 Cecilia Cackley: How did you become a puppeteer? When did you first become interested in puppetry as an art form?

Gabriela Cespedes: My training comes from acting. I started doing theater in 1988, with Mariu Carreras, a great teacher. It essentially taught me that theater takes place when we are dealing with the public and that is why you always have to create and perform work for an audience. Puppetry came later, in 1996 when I start to do street shows with two colleagues and became forever trapped in the art of puppetry …my interest in this technique must have been born from playing with small things, making houses, staging and playing with friends to make characters.

CC: Are there projects that have changed in response to audience comments? How do you maintain a balance between other people’s criticism and your own vision?

GC: At first audience comments about a work they had seen affected me a lot and I always tried to change small things … but after a while I realized that art is intimate and solitary, that one can not meet the whims of each viewer … so when someone makes any criticism I take it with respect and affection, and on the other hand I still respect my artwork as I conceived it. 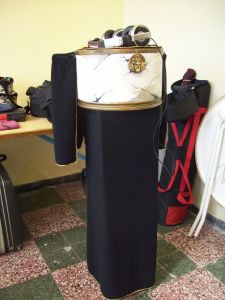 One of Gabi’s lambe-lambe shows, set up for spectators.

CC: Do you work alone or in collaboration with other puppeteers? Why or why not?

GC: At this moment all my works are solo … by choice or because it has been easier to move from one place to another by myself with my puppets !!!!
There are plans to work in groups … but we are always organizing activities in conjunction with other puppeteers.

CC: What project are you working on right now?

GC: At the moment I am researching miniature drawings to use in both stop-motion animation and lambe-lambe theater or caja magica.

CC: What advice do you have for people who want to work with or learn more about puppets?

GC: The art of puppetry is an ancient technique, captivating, trapping, that allows us to travel into unsuspected worlds … but mostly it is hard work and a lot of research, and that is fundamental to puppetry … and as they say in Japanese “give life to the wood” in that is everything, be able to give life to everything that comes into our HANDS !!!!!

2 thoughts on “An Interview with Gabriela Cespedes”