Both of these shows were presented as part of the Kennedy Center’s World Stages Festival in March 2014.

Perhaps as a result of their collaboration with Handspring, Bristol Old Vic presented a version of Dream that connected the characters and their story to objects, humble materials and craftsmanship. The set was an immediate hint that this was not going to be your usual, run-of-the-mill Shakespeare production. Ladders, stools, lattice and paint drops gave the feeling of being in a workshop, and one actor wandered about onstage handling wood and tools with ease.The costumes were rough work clothes, with few differences between the mechanicals and the nobles, while the actors playing Oberon and Titania carried large sculpted masks and in Oberon’s case an oversized jointed hand. The mechanicals used large blocks of wood as props in their rehearsal, which by the final performance of Pyramus and Thisbe had been carved into rough representations of the doomed lovers. Even the woods of Athens were displayed literally–the actors held up planks of wood for the lovers to hide behind and travel through during their scenes.

In keeping with the rough aesthetic, the puppets used for Puck and the other fairies were somewhat motley in style and appearance. Puck was played by three of the mechanicals, each holding a different object (mallet, fork, metal can, etc) that they brought together to form the head, body and appendages of the character. The exact setup might be different each time, but the hobgoblin could move like lightning simply by having all the objects zoom off in different directions, which was very effective whenever Oberon called for his servant. Peaseblossm and company were slightly more grotesque, with exaggerated features and only one or two body parts made from objects similar to Puck. Bottom’s transformation, like the woods of Athens, took Shakespeare’s text quite literally, with an over-the-top visual gag that the actor pulled off with aplomb. The transformation mechanism, along with fully realized versions of Oberon and Titania used in the final dance, were the only puppets that seemed to be created in a woven cane style similar to the War Horse puppets.

There was one small mystery: in the publicity photos for the show, the lovers each had a small puppet of themselves. Onstage, these were nowhere to be seen. I didn’t miss them; it made sense that puppetry was used for the otherworldly characters, with rough imitations  by the mechanicals as part of their own play within the play. The large masks and hands made Oberon and Titania larger than life, while Puck’s transformative qualities were superbly created (and recreated) by his collection of objects. This production of Dream brought the audience fully into the darkness and strangeness of the woods and the fairies’ world.

In the Terrace Theater, a smaller scale, yet arguably more epic story was on display in Penny Plain, an original show by Ronnie Burkett from Canada. Set in a future world that is disintegrating fast, the story centers on Penny Plain, an old woman in a boarding house full of odd characters who has only her dog for company. But Geoffrey has decided that he wants to be a man, not a dog and at the beginning of the play heads out into the world, leaving Penny by herself. As news clips are heard that detail the food and money shortages, the environmental disasters and the desperation of humanity, Penny and the rest of the people in the house try their best to survive.

Burkett performed Penny Plain, solo, controlling over 20 marionettes alone or in pairs, around the two levels of the set that depicted the boarding house. Some characters had two different puppets, one to appear on the upper floor and one with longer strings to appear on the lower. The style of both the writing and the puppets was naturalistic, with brilliant touches of the macabre. Burkett switched voices expertly throughout the rapid-fire dialogue, punctuated by heavy pauses. The themes of change, human nature and survival are heavy, but satire helped to undercut the serious tone (a scene with two US refugees from the south was especially delicious). Burkett built the tension in the story expertly, alternating gruesomely funny sequences with poignant conversations until the entire audience was riveted. Directly after the final blackout, I heard someone behind me heave a sigh of relief, as though being released from a magic spell. This show was a brilliant example of the power of pure puppetry. 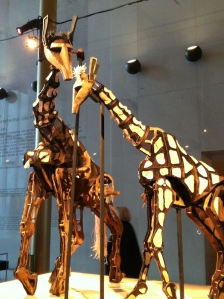 1. Creature Shop Challenge!  We’ve had reality shows about losing weight and finding romantic partners–why not about building puppets? Syfy channel has created a show where ten designers compete for a job at the Jim Henson Creature Shop. It airs on Tuesdays at 10pm, but you can also watch the episodes online. I haven’t seen it yet but I’m hoping to get some building ideas from watching what they come up with.

2. A theatrical version of Miyazaki’s film Princess Mononoke from 2013 that uses puppets made from recycled materials. Seriously, there’s absolutely nothing you can’t love about that sentence. This show is currently in a Research and Development stage again, so maybe there will be more opportunities to see it in the future!  From the UK company Whole Hog Theatre.

3. The World Stages Festival has been amazing and inspiring and we will be writing more about the performances we saw soon. If you can, stop by the Kennedy Center before the end of the weekend and see the fantastic puppet installations.

4.The Manipulate Festival is an annual celebration of visual theater in the UK that encourages visitors to ‘leave preconceptions at the door.’ Here’s an article highlighting several productions this year that included puppetry.

5.Muppets Most Wanted needs no explanation. A new feature length film with Kermit & Co–what are you waiting for? Go see it!

A roundup of events and people we highlighted on Twitter this month: 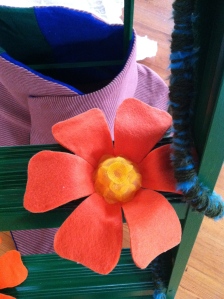 Giant flower from Under the Canopy. See item #5.

1. The Kennedy Center is hosting a World Stages Festival this March and there will be PUPPETS! Handspring Puppet Company,  that created War Horse, is working on a production of A Midsummer Night’s Dream and Ronnie Burkett Theatre of Marionettes from Canada is doing a show called Penny Plain. There will be puppets on display at the Kennedy Center that you can see for free. So yes. You should go.

2. Puppetry and activism are two of our favorite things. So even though we haven’t actually met in person, we’re big fans of The People’s Puppets of Occupy Wall Street. Hopefully one day we’ll get to work on something with them and maybe it will even involve giant puppet drops of water, like the ones you can see on their Facebook page.

3. All DC puppet fans should check out The Adventures of Alvin Sputnik: Deep Sea Explorer, playing at the Artisphere in Rosslyn from February 6-9. This is a heartwarming story about a deep-sea explorer in search of lost love, told through a combination of sound, puppetry and animation. Created by Weeping Spoon Productions from Perth, Australia, I saw this at the Edinburgh Fringe back in August and am looking forward to seeing it again.

4. Puppets in Prague is an amazing place to learn about marionettes (I did a workshop with them back in 2011) and they have a whole bunch of workshops going on this year. If you’re thinking about taking a trip to Prague (and really, why wouldn’t you be?) check them out.

5. Have we mentioned that we’re going to be at the Atlas INTERSECTIONS Festival this year? With not one, but TWO shows? March will be here before you know it, so you should get moving and buy tickets for our pieces Under the Canopy and Fabulas Mayas. With folktales, shadow puppets, and rainforest creatures, you really can’t go wrong!