In early March, we shared the full story of Selkie, titled What the Waves Bring at Source Theater in DC. It’s the first time we’ve had all the puppets and prop elements before an audience, and we were lucky enough to have David Moss taking photographs. Here are a few:

The other selkies, played by Nina Budabin Mcquown, Anji Lambert and Alison Daniels.

A seal looks over the water.

We’ve had a great time this year getting our Puppet Lobby series started. These events bring puppeteers together for conversations about different aspects of puppetry, from methods for building body puppets, to the challenges of writing a puppet show. Here are a few photos from our first two events. 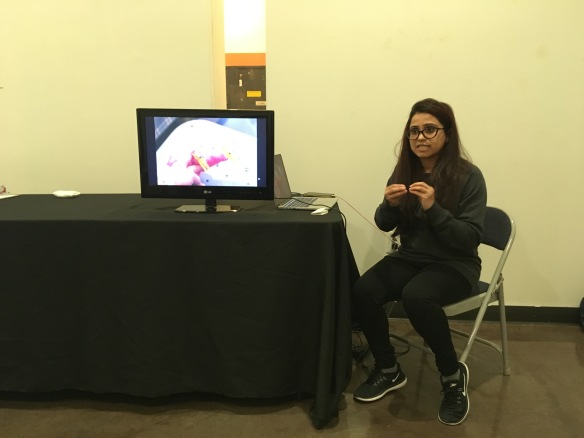 Kuroji Patrick and Hamida Khatri show off their stop-motion puppets.

We are very excited to be hard at work again on our show Malevolent Creatures! We first workshopped this piece in the summer of 2014, but it got put on hold for awhile as we focused on building and then performing Saudade. Now we are back at it, exploring the layers of meaning in stories featuring supernatural characters from British folklore.

The first segment of the show, which focuses on a witch from Leicestershire called Black Annis was developed and shown as part of a puppet slam at Black Cherry Puppet Theater in Baltimore this past month. Here are a few photos from rehearsals and the performance. Photos are by Cecilia Cackley and Bill Haas. 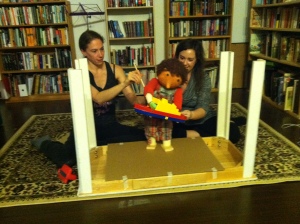 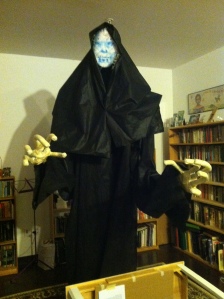 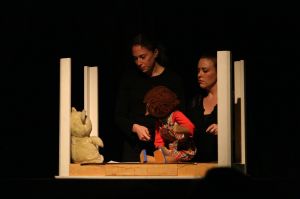 As part of our preparation for this tour of Saudade (which starts on Friday!) we were able to bring in photographer Liza Harbison to take some shots of the shadow puppets. Here are a few:

By far the most time-consuming part of building Saudade was the crankie which forms the bulk of the show. Additional images appear on the side screens, but most of the action happens on this very long roll of Tyvek in front of an LED light. It took nearly two months to design and cut out all the scenes on the crankie, and a week to put it all together. Here are photos from the process.

Spacing the images is important and takes time.

Amy and Genna work together to glue down an image. 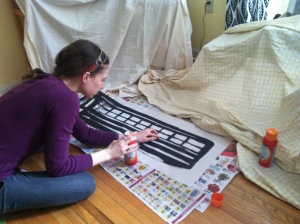 Each image gets sprayed with glue carefully. Sometimes it’s hard to keep different parts from sticking to each other before it’s glued down.

The roll of Tyvek is longer than our box so we had to carefully measure and cut about six inches off the bottom of the entire roll.

One of the many intricate images on the crankie. 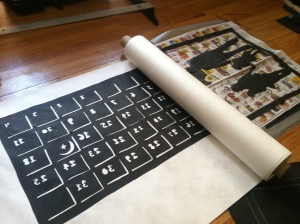 Delicate images wait on newspaper so they don’t get crushed before being added to the crankie. We took over most of the living room eventually. 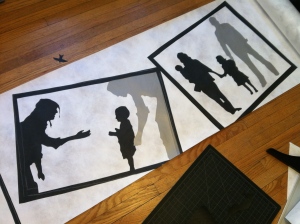 Most of the crankie images are cut from black Tyvek, but these included some silver tissue paper as well.

Amy makes an adjustment before gluing down the final image. 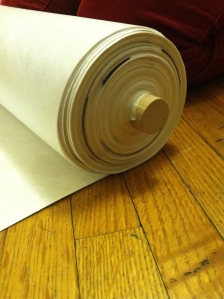 This is the final roll–nearly 3 inches thick!

Our first rehearsal with the finished roll, testing the light and the box.

Here’s what an image looks like from the reverse side… 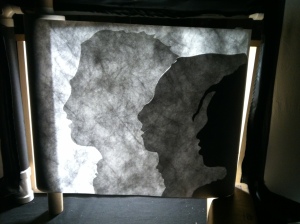 And here it is in light! Hope you enjoyed this tour of the building process!

We discovered over the course of Malevolent Creatures rehearsals that we’ve all gotten pretty similar reactions when the word ‘puppet’ comes up in ordinary conversation. Here are the top five comments we’re used to hearing. Have you made one or more of them when meeting a puppeteer?

1. “Oh like the Muppets!” Well, um, not always. In fact, we’ve never created a show with hand-and-rod style puppets before, although we’re in the planning stages for one with GALA Hispanic Theatre.

2. “So you do stuff like on Sesame Street!” No, not really. Not too much counting or alphabet songs in our shows. Not all puppets are intended for children, despite the ubiquity of Big Bird and Bert and Ernie in our culture.

3. “Um…like Pinnochio?” Aside from Jim Henson, this is probably the only other named puppet character that most people can come up with.

4. “How cute!” Yes, very….until the puppet starts to go on a rampage and eat the audience. Wait, what? Oh right. NOT ALL PUPPETS ARE FOR CHILDREN. OR SQUEAMISH ADULTS.

Puppets are not for the faint of heart. Photo by Patricia Germann.

We had a fantastic two showings of Malevolent Creatures a few weeks ago. If you were unable to join us, here are some photos of the puppets and the process. Check back soon for more information about the next development stage of this show!

Error: Twitter did not respond. Please wait a few minutes and refresh this page.