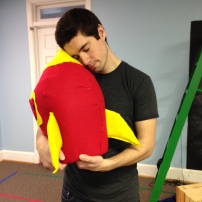 Séamus Miller with the rocket ship. Photo by Tia Shearer-Bassett.

We are thrilled with the enthusiastic response to Space-Bop, including this lovely review from Our Kids. If you would like to see it, visit our friends at Arts on the Horizon.

Meanwhile, here are a few photos of the rehearsal process. The cast is Séamus Miller as the performer/clown  and Christylez Bacon as the musician. 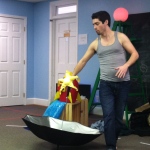 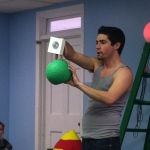 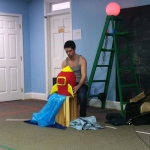 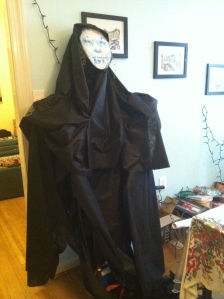 Puppets have to wait patiently until we’re ready to work with them again.

We had our last story meeting of the summer for Malevolent Creatures this past week and we are heading into the fall with many new ideas and renewed energy. If you missed our first workshop in June, keep an eye on this space for more info about our next one. We hope to see you there for some magical puppet encounters!

Ana Cackley is a rising senior at the University of Virginia. She is an English and Drama major and served as dramaturg for the initial workshop of MALEVOLENT CREATURES this summer. Here are some of her thoughts on being in the rehearsal room for the piece. 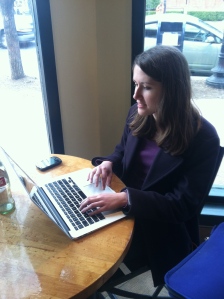 Ana researching on her ever-present laptop.

When I got asked to be the dramaturg for Wits End Puppets’ devised piece Malevolent Creatures, I was both thrilled and terrified. I’d never worked as a dramaturg before, let alone on a devised piece of theater. I had absolutely no idea what to expect. The only thing I really had to go on was that it was then called “The Fairy Project” — and fairies are a subject that I can and will research happily for any length of time. The sheer creativity of the project — a theater piece devised around the ways that humans interact with fairies, or mythological creatures — grabbed me instantly, along with the excitement and eagerness of the other researchers in the beginning stages of development. 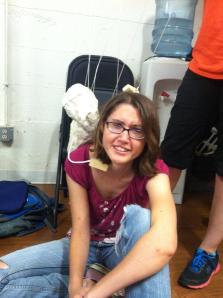 Ana getting attacked by one of the rehearsal puppets.

After we had done the research on various creatures and chosen the three that we would be focusing on for the first workshop, I thought that my role in the show was done. I didn’t expect to be needed at rehearsals, or have things to contribute. I was surprised and excited to learn that there was a lot more for me to do and work on. Rehearsals were some of the most fun parts of my week, as I took notes, looked things up, and gave opinions on the work that was being developed in front of me. The happiness and sense of play among the actors was inspiring and fun to watch, particularly once the rehearsal puppets began to be used and things got a little crazy. The willingness to explore that I saw in rehearsals only made me want to find out more and more about such weird and interesting characters, and research obscure details like what Orkney seals smell like, and the weather in Lincolnshire during the 18th century.

With the help of Google, anyone can be their own dramaturg. But most of us don’t get to trawl through the Internet endlessly about such a fascinating topic, and with such amazing people to support and add to the process. Working on Malevolent Creatures was always an interesting, funny, and occasionally terrifying experience. I’m really grateful that I got to fill a somewhat arcane position for such a new and exciting a piece. I’m literally counting down the days until we get to do it again. 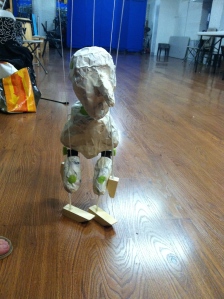 I created this rehearsal puppet for Malevolent Creatures about a month ago, with no idea that he would become such a fun tool for improvisation. Throughout our rehearsals, whenever there was a break, someone would pick him up, give him a funny voice and start a conversation. Eventually we decided that (outside of the world of the play) he was French. And since the World Cup is in full swing, it was inevitable that the puppet would get pulled into our many arguments about who was going to win the day’s games. Clearly, puppets love football just as much as people. Here is a short video of our puppet explaining his views, as performed by Elizabeth Dapo.

Since we are devising this show rather than working from an existing script, rehearsals are a mix of discussion, improvisation and lots and lots of laughter.  A reminder that our work-in-progress showings are June 26/27 at 7pm at GALA Hispanic Theatre! Tickets are free and you can reserve your spot here. A few photos of the team in action: 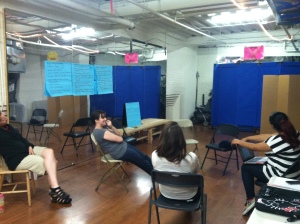 Improvising a set with items in the room. 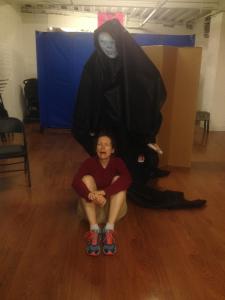 Carol reacts to a rehearsal puppet. 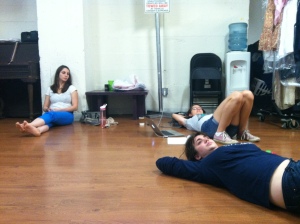 Sometimes you think better when everyone is on the floor. 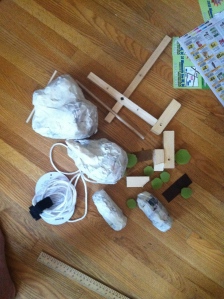 In celebration of Under the Canopy, which opens tomorrow at the Athenaeum in Old Town Alexandria, VA here are some rehearsal photos: 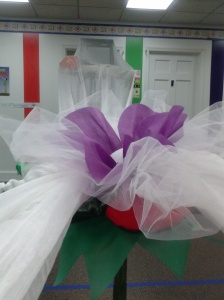 The anchor point for the titular canopy, in the center of the stage. 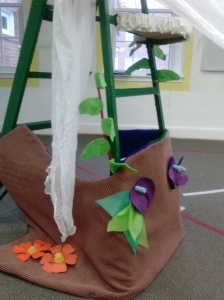 One of the three ladders that make up the set with leaves, flowers and vines. 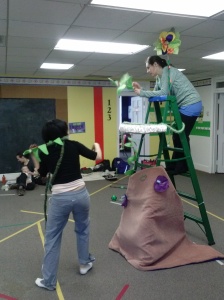 Cast members Nora Achrati and Betsy Rosen work with the objects and puppets to bring the rainforest to life. 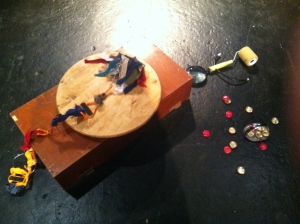 Our puppets Kismet and Mophead taking a break on the set.

We’re heading into our last few rehearsals before tech starts later this week.  New faces, new movements and even some new puppets! We have loaded our cabinets, drawers and lots and lots of paper into the Mead Theater Lab at Flashpoint and are figuring out how Kismet’s story fits into this space. Looking back over the past months of rehearsal, here are a few (very tiny) videos of our experiments and ideas from this crazy journey.