In 2012, I visited Argentina for the first time and I was fascinated when Mara Ferreya, a puppeteer from Cordoba, described a kind of street puppet show that took place in a box. She showed me a photograph, with three people all wearing headphones and looking through their own peephole at some invisible show inside a cardboard box. It didn’t look that hard to make.

Later that summer I made my first attempt at a similar show. I called it the Personal Puppet Show and performed it at farmer’s markets and community events. People liked it, but it was only after I went back to Argentina two years later and took a workshop with Mendoza puppeteer Gabriela Céspedes that I realized all of the things I had done wrong. Here is a list of them.

1. The box is too shallow. I could only see one side of the box in Mara’s photo and I didn’t realize it had to be a certain depth. Part of the magic of caja lambe-lambe is that the tiny peephole creates a forced perspective for the viewer. This gets ruined, however, if the box isn’t deep enough and the puppets end up too close to the eye. My box is only about 6-8 inches deep which is great for transport, but not for creating a forced perspective.

2. There are two eyeholes instead of one. This was purely me trying to be fancy. I thought two eyeholes would make it easier to see inside, but it’s actually the opposite. Because everyone has a slightly different distance between their eyes, some people find it much harder to focus, looking through two holes. One peephole per viewer works the best.

3. There is no viewfinder for the puppeteer. Another detail that I missed because I only saw a photo. There should be some kind of window in the back or the top of the box so that the puppeteer can see what they are doing. Otherwise, movement becomes imprecise and easy to mess up. Without a viewfinder, my puppeteering isn’t as good as it could be. 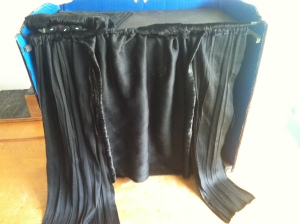 4. There is a curtain at the back, instead of holes for the puppeteers hands. Another mistake that causes practical problems for puppeteering. Trying to smoothly move my hands (and puppets) between pieces of fabric is difficult and it’s easy for the cardboard puppets to get stuck. This creates a jerking motion as they enter the scene, which ruins the illusion of movement. Most boxes have holes for the puppeteer’s hands either at the back or the side, with a curtain over the top to block the light spill. It is much easier to place a puppet in front of this curtain and then enter the box, rather than trying to do both those movements at once. Another option if your puppets are on vertical rods is to cut the holes in the top of the box and bring the puppets in from above.

5. The box isn’t created with a single show in mind. This is the biggest mistake I made, and it’s arguably the one that takes the Personal Puppet Show out of the category of caja lambe-lambe. A true caja show is a miniature world, one that is constructed for the purpose of telling one short, 1-3 minute story and that story alone. The walls, the floor, the ceiling, the puppets, the soundtrack–all of these should combine to create the illusion of a complete setting. My box, with its one-color walls, black curtain background and plain floor does not do this.

Despite (or perhaps because of) my many mistakes, I enjoyed building my Personal Puppet Show and felt very much at home with the style of puppetry. After studying with Gabriela Céspedes and building a second show as part of the 2015 Fringe project I Thought the Earth Remembered Me I was only more convinced. This year, I’m looking forward to premiering my third caja show, called Library Love and demonstrating how much I’ve learned since I first built the Personal Puppet Show.

Wit’s End artistic director Cecilia Cackley is currently traveling in South America. While she is gone, Cecilia is keeping a visual journal of the places she visits and shows that she sees. She will be posting pages here occasionally as virtual postcards from her trip. 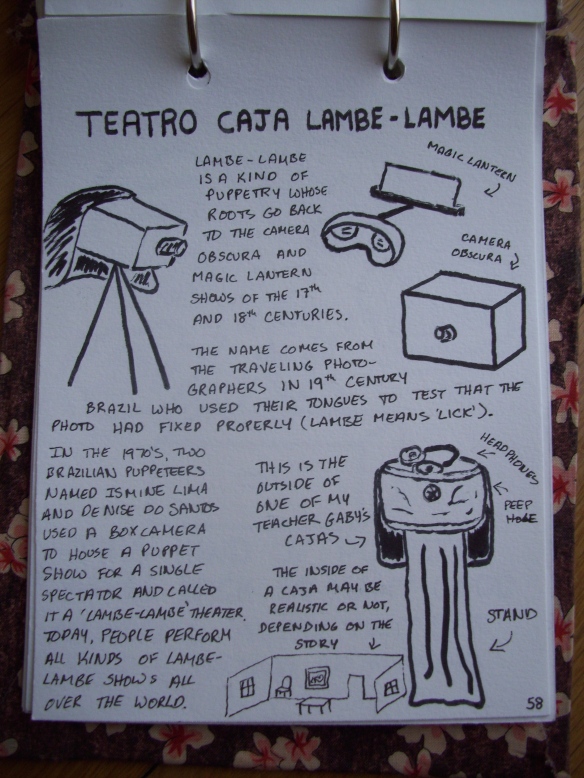 Our Personal Puppet Show, whose point is to make you smile, and wonder a little.

This is Washington DC, so the first question you usually get upon meeting new people is “So, what do you do?” When I say I’m a puppeteer, two words are frequently heard: “Really?” and “Why?” A few weeks ago, performing the Personal Puppet Show at Fenton Street Market, a gentleman who sat down to see the show asked me afterward “What was the point of that?” At the time, I responded “To get you to smile–hey, look, it worked!” but I’ve continued to think about his question, as it’s one that I think many people seem to have about puppets and art in general.

Does art have to have a point? Can art exist on its own, free of any agenda or intention? Is that even possible? I wonder, because it seems that so much content created nowadays (digital and otherwise) is meant to make us THINK. Entertainment for children includes Important Information To Know and newspapers and websites abound with infographics and charts and statistics which will help you better understand the world around you. Not to say that any of this is bad. But sometimes, I think it’s important that art gives us a little break from all that. A space to smile, and let your mind wander. That, for me anyway, is the point.

For anyone in search of puppets this upcoming weekend, Saturday June 1 will be a busy day for us! From noon to 2pm we will be performing our Personal Puppet Show at Fenton Street Market in Silver Spring and then we will move to Woolly Mammoth Theatre in DC for their Unleash Your Inner Artist event from 3-6pm. If you’re in Silver Spring, stop by to see our latest 1-minute show ‘Jabberwocky’ while also finding some fantastic handmade items at the market! If you are hanging out downtown in the afternoon, get out of the heat and indulge your imagination with our show, the gigantic string instruments of Michael Verdon and the poignant love letters of the Love Collective.

You need to reserve free tickets for the Woolly event, so please come out and support us, our fellow artists and our supporting organization, FIGMENT DC. We had an awesome time playing with our friends at FIGMENT last fall and we are looking forward to partnering with them more in the future!