As we endeavor to mount Malevolent Creatures: What the Waves Bring as part of Space4 with CulturalDC, a big build is underway in my studio space. When we did a 20 minute section of the piece last year I had the main selkie puppet constructed enough for use, but she was far from finished, and I discovered some problems during that workshop.

For one, the puppet has to be worn by our puppetress, Amy Kellett, who quickly discovered that the play we’ve written doesn’t have many “down” moments for Selkie. The lower legs of the puppet are Amy’s legs and the puppet is attached at the knees. Amy holds the puppets head and controls the movement of one arm, but it is actually taking A LOT of arm and back strength to keep the puppet from slumping down. This is a problem that my redesign/rebuild needs to address. I haven’t quite figured out yet how to handle it. I might reach out to a master designer in our area for some help.

Secondly I decided to put the puppet in a nude unitard because for some of the scenes she appears nude, but it didn’t end up looking like she was nude; it looked like someone wearing a nude unitard. In retrospect I think to myself “duh!” So I had to deconstruct the unitard and pull the material taut over each body part. This way it will look more like a nude woman. It’s very tricky pulling the fabric taut though. It wants to fold in ways that make it look like fabric. Learning to do this skin-job is a new challenge that I’m still figuring out too.

Puppetry is full of problem solving. I never seem to anticipate all the challenges that come up, but that’s part of the fun for me. I remember working on a show a few years ago in which I built a puppet whose head didn’t move from side to side because of the way I designed the shoulders. It was a total accident, and then I had to quickly figure out how to adjust that design. I came up with a design in which I inserted the neck dowel into the hosing that was the spine. I kept them together with  elastic that ran the length of the spine and connected through the tubing and up to the top of the neck dowel where I had wired some loops around which I could sew the elastic (see image). It was pretty cool figuring that out. I love it when a problem comes my way. It’s the best part of building for me!

My dad is an engineer so sometimes I run things by him; he loves problem solving too. But on more than one occasion, he has wanted to take the design in a completely different direction. It’s at those times that I turn into a little kid again with the impulse to say: “No I want to do it by myself!” I have to remind myself it’s okay to learn from others and get more experience in the process. 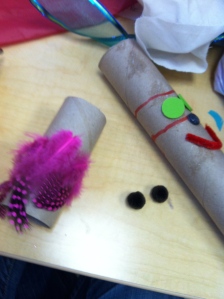 How do you turn a cardboard tube into a bird? Into a man?

It was great to see the latest Education issue of The Washington Post Magazine devoted to arts education, with a lead article by Anne Midgette. I found it encouraging to read about the many efforts by various arts organizations to bring their work to students, either during the regular school day or through after-school programs, especially because education is such a big part of what I am trying to do with this company. Midgette brings up some great points in the article and a later addendum, among them the value of arts as a motivator for students who struggle academically, as a means of teaching focus and the struggle for some organizations to balance creating art with teaching. I had some further thoughts on the value of puppetry in arts education, and specifically the challenge of teaching problem solving.

Problem solving is a huge part of learning and it can be an incredibly frustrating skill to learn, especially for younger students. Authentic problem solving is the sort of skill that easily gets pushed to the side in favor of memorization and rote drill when the classroom culture is based around standardized tests, as I know from personal experience. However, this only makes things harder for kids when they are asked to make decisions on their own. When you are used to every task having a specific answer and every assignment needing to be done ‘right,’ facing an activity without a certain set of steps and no guarantees can be intimidating.  Students are used to the answer being in the back of the book or in their teacher’s head. But what if your teacher doesn’t know the answer? What if no one does?

Puppets require lots of problem solving and there is no ‘right’ answer to be found–only what works for you and what looks right to your eyes as the artist. How can you make your puppet walk? Which yarn is the best hair? Does your puppet have arms or legs? Puppetry is an ideal low-cost way to introduce students to the concept of making decisions and solving problems. After all, even if math problems and grammar rules have set answers, not everything in life is laid out in perfect patterns and students need to learn to make decisions that are best for them. Why not give them the opportunity to problem solve with a puppet, rather than waiting until they are so set on getting everything perfect that one challenging task reduces them to tears? Flexibility and creativity are skills that are important and I hope that as Wit’s End Puppets continues to grow as a company, we will have the opportunity to encourage them in many more students.

I was delighted to spend February working with the kindergarten after-care group at School within School at Logan Annex, a Reggio Emilia inspired center of learning. We spent four sessions learning about different kinds of puppets, building our own puppets from recycled materials and inventing scenes and stories to perform in small groups. Here are some photos of their marvelous, creative work!

The student who made this was very clear that it was a duck, with gold wings.

This puppet is named Elizabeth. Her hair is scrap fabric and her body is a toilet paper tube. 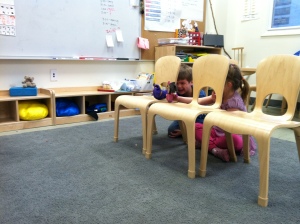 Students performing a scene using chairs as a stage.

The chairs allowed students to play puppets both above and below the seats. 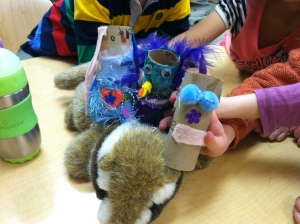 Three student made puppets hitch a ride on a chipmunk puppet that a teacher brought.